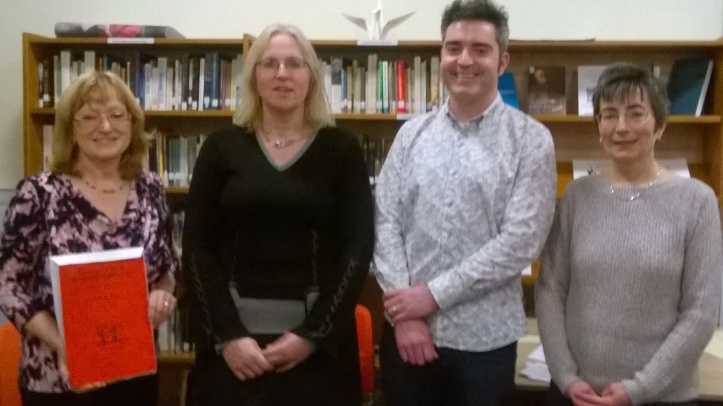 After something of a phone disaster recently, I finally managed to retrieve some of my photos. (Why we use phones instead of cameras these days is a rant for another day.)

So. A bit after the event, but here I am on February 4th 2016 in Northampton, after winning the HE Bates Competition with my short story ‘Five Staves and an Instant’.  I’m the giddy one with the big grin clutching the certificate. Next to me is Morgen Bailey who was chief judge, next to her is Dan Purdue who was the second prizewinner, and Julia Thorley who won the Northamptonshire prize.

I had a lovely evening (traffic chaos on the M1 notwithstanding), and I am still thrilled by the win. The competition is run by the Northampton Writers’ Group in memory of the late HE Bates, who was a prolific story writer. He would be known to many as the author whose books inspired the TV series ‘The Darling Buds of May’ which famously launched the acting career of Catherine Zeta Jones, and starred David Jason and Pam Ferris.

Thank you to Group Secretary Nick Hamlyn who invited me to read my story without letting on that I was the overall winner.  I arrived very late (sorry!) so I missed the pre-amble and had no idea where I was in the scheme of things until Morgen started talking about the winning story and I recognised my gate. I wish I could bottle that feeling of having my name announced as the winner – fabulous!