It’s all in the name

Just in case you’re wondering about me having ‘notions’ (which everyone knows is Irish for Fur Coat and No Knickers), what with me insisting that middle letter ‘G’ in my name is important, here’s why: 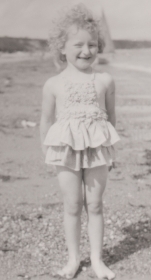 It is nothing to do with ‘G’ strings, although I wonder if you are checking me out because someone mentioned the underwear model Louise Cole?

I discovered (quite by accident, of course) that if you Google ‘Louise Cole’ you’ll find a rather lovely raven-haired girl modeling underwear.

Quite clearly, that’s not me, not least because I’m, well … blonde and she’s not.

If you Google ‘Louise G Cole’ however, there I am (if you look hard enough), not modelling undies though, obviously. There’s a lot of Louise Coles about, but I’m the one who is a poet and short story writer, originally from Worcestershire in England and now living in the west of Ireland.

I hope you’re not too disappointed.

PS It’s for Gillian, just in case you were wondering.