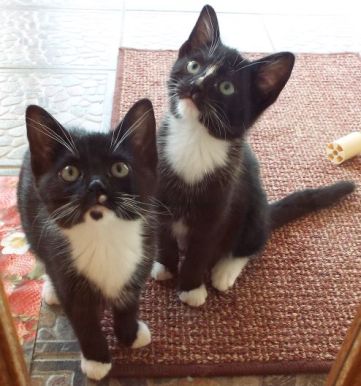 So here I am, still plodding away behind the scenes. But with a new look, which has come about because of two kittens.

I’m a tad allergic to cats, which is ironic since I’m mad about them. The contact lenses  have been an agony of smarting and itching since Linus and Dot arrived on the scene (can you guess which is which?), so I’m back to wearing specs.

Meanwhile, in between kitten capers, I’ve had my nose to the (writing) grindstone, honest!

I recently took some very good advice from my *poetry mentor and stepped back from submitting to journals and publishers because I was getting a dispiriting number of knock-backs.

Instead, I decided to concentrate on the process of writing, without thinking too much about publication. And it has worked!

My creativity is starting to re-surface after a worrying hiatus, and I am producing some new poems and stories.  They will be (for five minutes only) the best I’ve ever written. Then I’ll think they must be the worst imaginable garbage ever (that notion will last way longer than five minutes). Then I’ll tell myself it will all come good with a bit of hard work. If I do enough editing to make the words appear as if they are all in the right order, I might eventually be persuaded to share. It’s a long (but enjoyable) process!

I’m always telling other people that’s what they should do, write because they enjoy the process, not because they want to be published,  but I’d not been following my own advice.

For a while, I have felt out of kilter with the zeitgeist, my style and content not being what is popular at the moment. No matter! Everything goes in cycles, and my turn will eventually come (that’s me, the optimist, talking).

*My poetry mentor, through the Dedalus Press Mentorship Programme, has been Joseph Woods who has been giving me sound advice, making me question what I’m trying to achieve, as well as why, how and when.

Anyway, part of my new regime has been to step away from the furore that is social media – I find most of it a head-wreck, anyway. But I’m still fond of this medium, so I am about to revamp my blog/website to better reflect what I’m up to from here on.

I hope you’ll come along for the craic!